The baby books that I have in my house keep telling me that little b is now the weight of a cauliflower and the length of an english cucumber. However, at this particular point in time, this is about what little b looks like, and how big he is.... 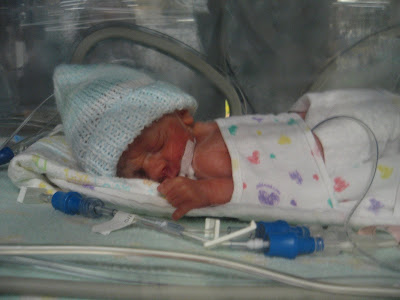 Little Isaac Aaron Renkema, little B's cousin, was born at just over 27 weeks this past May. While I find it more comforting to think about having a little baby like this inside me than an assorted selection of vegetables, it's a little crazy to think that he is a fully formed baby right now, just working on getting bigger and stronger!
From the head of JvO on Thursday, November 25, 2010 2 comments: 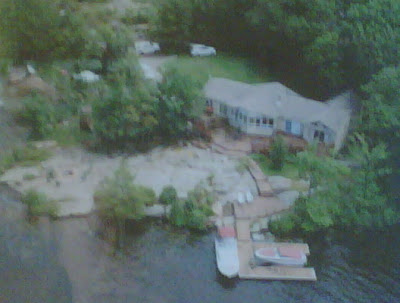 This past weekend, I headed out to a gorgeous cottage with some ladies from Redeemer (and three little ladies, aged 5, 5, and 6.75). The cottage belongs to one of the girls' parents, and if I was here I would move in for the weekend and refuse to move out again. The place has 6 bedrooms, 3 bathrooms, a livingroom the size of my entire living space at home, a gorgeous kitchen complete with a dishwasher, a hot tub, a deck worth more than my car, and an incredible view to boot. 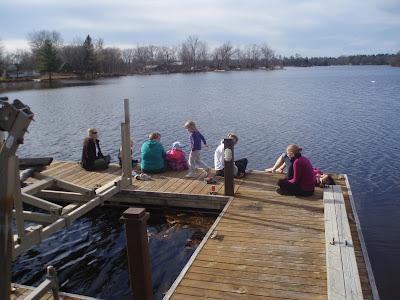 The weekend was filled with eating, lazing around, solving the world's problems (or maybe just Redeemer's), watching disney movies and chick flicks, sleeping, and eating some more. 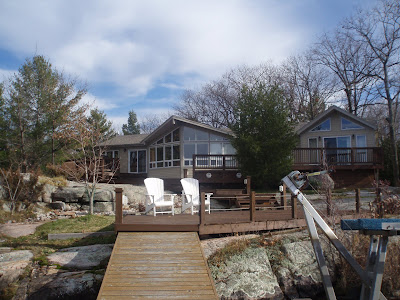 It was really good to spend some time with these girls outside of Redeemer and get to know them on a different level. 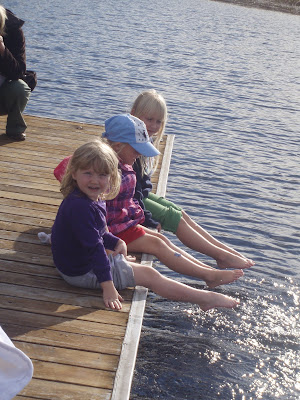 Little B(aby)vO, or "Little B" as he shall henceforth be called, has been impacting my life in two major ways in the last month.

1) Pregnancy Insomnia. This is not cool. I sleep comfortably. I'm not hungry at night, and I don't feel particularly anxious or worried about anything at the moment. However, almost every morning I wake up to see the clock say anything between 3:00 and 3:06 (yes, it is that precise). I don't wake up because I have to go to the bathroom. I just wake up. And stay awake. for anywhere from 2-4 hours. It's awesome. Sometimes, if I get too restless during the awake period, I will get up and go to the couch or to the mattress in Brian's office to rest and finally fall asleep again. At my midwife appointment yesterday, Karen recommended that I get up for 15 minutes and do something, be it reading, watching tv, taking a bath, etc, and then go back to bed. So, last night at 3:30, I got up, check fb, read an article in the December Canadian Living, and went back to bed. And stayed awake. Until my alarm went off. Amazing. I'm functioning better on this degree of lack of sleep than I thought I would, but it is getting a wee bit tiring. And don't any of you dare tell me that this is "preparing me for those sleepless nights with the baby" because I've heard that enough, and don't really want to hear it anymore, especially from people who have never had pregnancy insomnia, especially during the second trimester. :) Thanks for the helpful suggestion, though. I have to admit, I'm more than a bit jealous of those who are pregnant and who are not working, meaning that they are able to sleep in and take naps. Sigh.

2) Lower Back Pain when Walking, Sitting, and Moving in General. This has also been fun. It started about a month and a half ago, and it really is not that bad at this point - but it has been discouraging me from taking long walks with Izzy, or from using any of the machines in the gym to work out. This condition, however, I hope is fixable - I had my first visit with a Dundas Chiropractor last night by the name of Dr. Andrea Ferretti. She is a small, formidable woman, and she knows her stuff. I've never been to a chiropractor before, but I went to her on the recommendation of a few other friends who saw her for pregnancy-related back pain. She has a LOT of letters behind her name (D.C., F.I.C.P.A., B.Sc., plus a few not on her business card that were in her office), and has spent several years studying with an OB. She has students from the McMaster Midwifery program intern with her so that they can learn about the benefits of chiropractic care for pregnant women. All in all, she seems to be extremely well trained, is very good at communicating with her patients, and has a very interesting method of adjusting her patients. She has this table that stands in an upright position, and then the patient stands on the end of it. The table tilts down so that it's horizontal, and then she activates different parts of the table and they kind of jump up and down, jolting a particular area of the body. Anyhow, while I still have that pain my left hip / lower back when I walk, it's not as severe as it was yesterday. I have two more appointments next week to finish the adjustments, and then I'll go every few weeks after that until the baby is born to keep all of my bones where they should be and to "get things ready" for labour and delivery. I'm glad that I have benefits to cover the cost of this treatment, because I wouldn't have come otherwise - but I'm hoping that it's going to make a big difference! Having said that, I still really do love massage therapists - it's so calming and relaxing to go to one of those appointments. Not so much a chiropractic appointment. Oh well, you can't win them all.

A third way that Little B has been impacting my life is that he's starting to move around a lot more. Or at least, I can feel him sometimes now. Many people out there seem bound and determined to try and make me worried about how long it has taken me to feel the baby - "Is that normal?" "Shouldn't the baby be moving around a lot by this point?" "Don't people usually feel the baby move between 16 and 19 weeks?" "Aren't you worried?!" Fortunately, most people are neither doctors nor midwives, or even trained in any medical field at all. I have what is called an anterior placenta, which means that the placenta that I grew to protect the baby has grown on the front of me as opposed to the back. This is not a dangerous condition, either for myself or for the baby - but it does mean that there is an extra layer inbetween me and the baby in the front - so the baby's movements have to be pretty strong to get noticed through the extra barrier. My midwife says that his bum is up at the top of my stomach, but I have no idea how she can tell that because when I feel around and press down, I can't feel anything at all. I don't feel him consistently, but he was particularly active last night while I was laying in bed not sleeping.

Little B is only a week and a half younger now than his cousin Isaac was when he was born in May, and I think about that pretty much every day. I'm not worried that he will come so early (I do have my doubts of going to full term, though) but it is incredible to think of what he looks like already - by 27 weeks, Isaac was a perfect, incredibly tiny little baby - everything was there!!
From the head of JvO on Friday, November 12, 2010 18 comments: 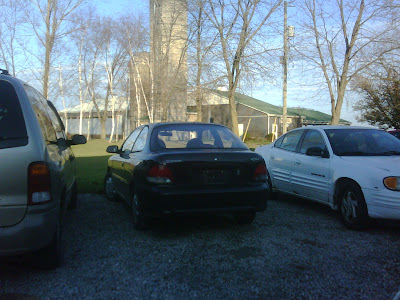 For a long time now, Brian and I have known that if and when we had a baby we'd have to trade one of our two-door cars for a four-door family-suitable car. So, this summer when my car began to literally fall apart, we decided that it wasn't really worth the money that we'd have to put into it to fix it. It has been a great car to have around for the past four years, but the Safety on the car both when David brought it into Canada and when we bought it from David was given somewhat generously... In order to safety it to sell to someone else, we'd have to have daytime running lights installed and car seat anchors, among other things... Anyhow, as the car sits in Neil's (our trusty mechanic) parking lot right now, the passenger window a) does not open and b) does not have a crank to open it, even if it did open. The driver's window opens, but in order to put it back up, one hand has to pull the window up while the other cranks it up, or it won't stay in the window tracks. The parking break light, both interior and exterior, stays on regardless of whether it is actually on or not. Something in the body of the car broke at some point and the car rattles consistently. The best thing is that the car only has one working brake left - and it's the rear right. 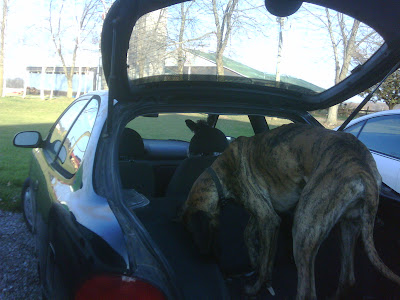 Anyhow, needless to say, by this point I'm not so sad to say goodbye to the car. When we got our new one last week, Brian drove the Accent to Neil's place and couldn't believe that I had been driving the car like that . He was scared just driving it to Neil's place, which validated my concerns of the last few weeks.... I stopped by Neil's place yesterday to clean out the car, and Neil's huge dog Chaos really wanted to play with Izzy. Izzy wasn't having any of it, but Chaos didn't give up too easily... 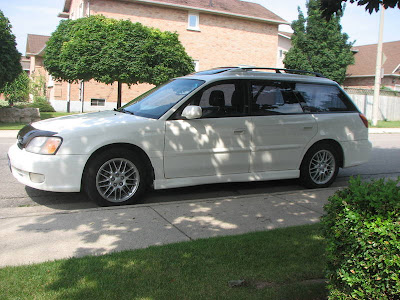 And here's the new car. It's a little strange driving an automatic after having a standard for so long, and it's a lot strange to drive a car that's so long and wide. However, it's wonderful to have so much room in the back of the car without having to fold down the seats.
From the head of JvO on Monday, November 08, 2010 2 comments: